I am really, really falling down on the blogging front. This disappoints me—though I have the very best reason for falling down: I’m writing with the kind of joy and focus I haven’t felt since three books ago, with The Pattern Scars.

I did a reading last week, as part of the Words at the Wise reading series at the small but mighty Wise Bar on Bloor West. I’ve done many readings over the years, the most recent of which have all been via ChiZine Publications, at my launches. I was nervous about this latest one, because it was out of my comfort zone: an organizer and other writers I didn’t know; an audience I mostly wouldn’t know either—plus (and possibly most nerve-wrackingly) an excerpt that wasn’t from a finished book.

The other two authors were Claire Horsnell and Andrew Simpson (who was also the organizer). They read before I did, and their pieces were funny and smart—totally engaging. The small-but-mighty space was full of people who were attentive and appreciative. Of course, I still got my customary right-before jitters. But once I was at the mic and talking, it was all OK. More than OK. I spoke new words—words which, despite the joy and focus with which I’ve been setting them down on the page, I was afraid might not work aloud. They did.

I fear and resent hope. Hope is an almost embarrassing thing to have felt, when it’s crushed, and I’d kind of prefer not to let it push up into my brain at all. But it does, time after here-we-go-again time, and it is now. From Gibraltar in 1781 to Quebec in 1878—from a girl named Ana de la Rosa to a man named Louis Riel—I feel like I have something, here, that might be something. I said at the event last week that reading from a work-in-progress is frequently considered seriously jinxing by writers who are otherwise perfectly sensible, non-superstitious people. Setting down the fact of my newest hope may be similarly foolhardy. But there it is. I’m 50,000 words into a story that excites me beyond even the excitement I felt writing about Bronze Age Crete. (Yes. Truly.)

“A madman came by steamer today from Montreal.” That’s how it starts. I can’t wait to find out how it ends. 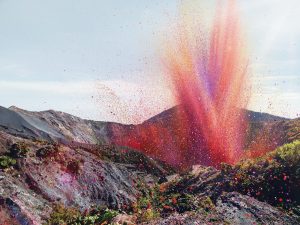