We were out for dinner the other night with friends, talking about the dumpster-fire demise of my former publisher, and other examples of egregious business dealings in the small-press world. One of our friends asked, mostly rhetorically, why so many authors allowed themselves to be taken in. I said that I was one such author—that I’d been profoundly unsettled by my publisher’s behaviour (both professionally and interpersonally) for a good long while before our relationship ended, but that I’d done nothing about it. What they offered me was something I still desperately needed: my name on a beautifully-designed cover. My books on shelves. My books on awards lists. My presence requested at readings and on panels. The promise of a new contract.

And it’s the strangest thing: I don’t feel as if I need any of that, now. I’m not sure I even want it.

So much of the writing space in my head used to be filled with unpleasant, grasping emotions: envy and resentment of other authors, say, and the shame and chagrin that resulted. The creeping sense of being left behind and overlooked.

There were positive nooks in that mental writing space, of course. Writing, and planning for writing, can be an incomparable rush. But the pleasure was never pure, when I was mired in jealousy, or depressed about how long it was taking me to get a book done. Far too often, my hunger wasn’t just for the writing—and this hunger twisted right back around and devoured me.

Maybe I’m just down—profoundly exhausted by my latest book, which has taken over four years to write and rewrite. Maybe it’s the lingering effects of my former publisher’s demise, and the fact that none of my five books has a home where people could find them, if they looked. I don’t know, though. I don’t feel down. There’s no self-pitying, disingenuous noise in my head. What there is is quiet. It’s so odd. The last time there was writing-related quiet in my head might have been when I was a teenager, producing a slew of Alexander the Great shorts, plus three novels. It was the stories that mattered then, and not what happened to them when they were done.

One obvious move would be to work on separating hunger from the worst parts of ego. Self-awareness and self-control. Those sound good.

For now, though, I don’t know when I’ll write again. I’m thinking about finding a new, online home for my five books, and this may be enough to kick me back into hungry-in-a-positive-way gear. I can wait and see. I have a day job, and the teaching that keeps me involved in other people’s writing. For now, I feel calm, not becalmed.

This—as Johnny Carson (and then Dana Carvey) might have said—is some weird, wild stuff. 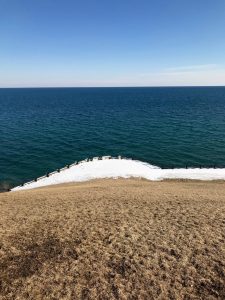