“Hark! the footsteps of the Groan!”

I found Gormenghast in Israel. Twice.

This country. I attempt to process what I’m learning of its past and its present as I follow Adam, our host and guide, through Jerusalem’s Old City, and Tel Aviv’s Central Bus Station—but there’s too much. I hear, and I try to absorb, but even in the moment, I know I won’t be able to truly understand. Maybe this is why Gormenghast is what I think of, first and most persistently, as I walk. It’s the wrong way ’round, of course—saying these real places evoke a fictional one. Backwards, and also unjust, to compare (mostly) lived-in spaces with one that’s forever crumbling to ruin.

It’s a labyrinth, and it’s Bronze Age all the way up to now—with the “now” being the most mind-boggling part, to me. I’ve been to ruins before. I’ve wandered through them, marvelling at fallen columns and half-buried walls, trying to rebuild them in my imagination, and people them with historically-accurate citizens. But this Old City teems with actual people—people who live here now.

“How late can you come here, at night?” I ask Adam.

I commend him for not laughing at me. It’s just that I find it so hard to wrap my head around the combination of ancient stone and the bustle of markets that aren’t just for tourists (though on David Street it’s pretty clear that tourists are the targets). People live here and work here, passing from quarter to quarter as gawkers like me get underfoot.

But as for Gormenghast. We follow partly-covered market streets laid out before the Romans arrived, each of their arched alcoves filled with wares: bags of spices; pails of bright pink pickled cauliflower and olives; bolts of cloth; Sponge Bob t-shirts and Blundstones. We turn a corner and walk some more, along quieter alleys. Butchers hack away while cats wait on their stoops. The air is heavy with blood and fruit smells, and some other musky thing (kief, I hear someone say, nearby). Turn and turn again; walk up one cobbled lane and down another, past people’s doorways and menorahs that are almost as tall as we are. Up and down, up and down—for the labyrinth is vertical as well as horizontal.

The Holy Sepulchre is a Gormenghast unto itself: glorious, above-ground chapels that dazzle with gold, blue, green paint; subterranean chapels that haven’t been fully excavated yet, full of ragged stone and dust.

We end up on the rooftops. Muezzins’ and rabbis’ voices drift around and past us, sometimes almost hitting harmony and synch. We look down through metal lattice at the market alcoves. We walk across people’s roofs, all of them connected, though unevenly, so we sometimes have to jump down or up. Bikes lie strewn about, and strollers, toys, lawn chairs. There are damp patches from all the rain.

I go into the Old City on two separate occasions. I remember some of the alleys and streets, the second time, and I have a sense of which quarter’s where, but mostly it’s Gormenghast: Every time I turn around it’s a new hubbub or quiet, a new smell, a new vista opening up, at the top of a wall or the end of a street.

Adam tries not to tell us too much about the place before he leads us there, on a day of unwontedly torrential rain, but he kind of fails. “It’s amazing,” he says, practically bouncing on his heels. “I don’t want to spoil it, but…”

Construction began in 1967, he tells us, but there was financial trouble, and the station wasn’t operational until 1993. Seven floors of retail space! A hub of transportation and shopping! A place where people would meet, whether or not they were taking a bus, or alighting from one!

Only it didn’t work out that way. From the very first day it was open, the station took on a life of its own. Now, Adam informs us as we make our way toward it, it would be more expensive to demolish than it would be to leave alone. “Just wait. We’re nearly there. I hope you like it. It’s amazing.”

Once we’ve passed through the magnetometers (manned languidly, at best), we emerge into a space of light and noise—a market where people sell electronic kittens that pounce and meow and fall helplessly onto their sides, and sunglasses, and Christmas ornaments, and t-shirts, undergarments, carpets and kitchenware and CDs. There’s a McDonalds just inside the entrance. There’s music. Voices yelling and laughing, buying and selling.

Adam’s still bouncing on his heels. “Let’s go this way…”

It takes only moments to move past beyond lights and voices. Glass doors and windows extend out of sight, like post-apocalyptic versions of the Old City market stalls. “Artists sometimes use these stores”—and we see evidence of this almost immediately. The “stores” are tiny. Some are empty; some contain blind child mannequins and birds, pendulous eyeballs, shelves with old-fashioned sewing machines and dolls in lace dresses. Others are awash in newspapers and dust. We wander, taking photos that will never do any of it justice. The stink of urine is suffocating.

It seems we’re on level 3. We descend to 2. I think it’s here we come upon a guy leaning against a railing. He’s got some items lined up on the ledge in front of him; he sweeps them all toward him, as we approach, and moves to the other side of the walkway. He bends, fiddles, ties and tightens. He’s alone in this dank, dark place, shooting up, shying away from us as we take yet more photos of cement and decay.

We descend to 1. The floor isn’t uniform: its tiles rise or shift underfoot, with a bizarre combination of squelching and clinking. It’s very dark. We pass a ticket booth for a movie theatre Adam hasn’t ever found, in all his forays here. We see a painted wall that was maybe never a gelato place. Ramps up to bus bays that were never used, though the signs are there, waiting to inform passengers of the arrival time of the next bus. Long, red benches, and chairs arranged in a semi-circle—empty, all of them, and sunk in shadow.

Adam’s our Titus. He’s the guy who knows many of the deserted corridors, the turnings down into darkness and shattered tile. Many, but not all: “I haven’t been here before,” he says, as we hesitate before an open door in the deepest part of the station. We glance at each other. We cross the threshold.

Bats chitter and squeak, invisible within recesses high up in the wall. As we walk, they swoop above us: enormous creatures with wingspans that make me cringe. Everything here induces both cringing and awe. The locked iron door of the shelter built during the first Iraq war. The puddles that might not be just rainwater. A school desk, an armchair, a child’s purple plastic wheeled toy, covered in grime. Filthy cats, slinking out from under dumpsters and then back again, when we coo at them. Coils of pipe and giant bags of cement. Cobwebs festooning a wall by a door we hope and fear will be unlocked, but isn’t. Unfinished half-walls and dirty columns, stretching up to networks of pipes and stained ceilings.

There are so many elements here that make me think of Jerusalem’s Old City. This strikes me as a sacrilegious thought, but it persists, as the idea of Gormenghast does. There are columns and sunken places and soaring places; spaces where people meet and spaces where all is quiet; smells and sounds that are warped and strange with distance or enclosure.

Only now, as I’m typing this, have I decided that comparing the Old City to Gormenghast is more than backward or unjust: it’s wrong. There’s no similarity, other than the ancient quality of the stone, and the sense of a labyrinth that’s unfolding and constricting at once. The Central Bus Station’s the real analogue; it has Gormenghast’s weirdly noble, utterly awe-inspiring malignancy and squalor.

The fact that all of these places are now tangled together in my head, though, knotted up in confusion and wonder—this makes an addled sort of sense.

“Through honeycombs of stone would now be wandering the passions in their clay. There would be tears and there would be strange laughter. Fierce births and deaths beneath umbrageous ceilings. And dreams, and violence, and disenchantment.” (Titus Groan) 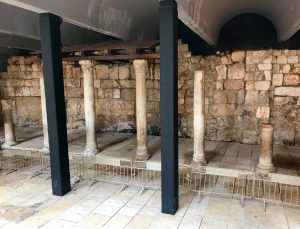