Star Wars: The Force Awakens spoilers below. They’re not big ones, but I would have been irritated if I’d read something like this before I’d seen the movie. So, to those who care: Consider yourselves warned.

I was once Luke Skywalker’s wife. Yup: Luke’s. Not Han’s—when I was seven, Han did nothing for me. I had no idea who David Cassidy was: there were no feathery-haired blond boys in my life at all, until Luke ran across the sand of Tatooine, whining at Uncle Owen. I didn’t care about the whining. I didn’t know what bad acting was. Luke was my one and only 70s fixation—and he stayed with me well into the 80s, long past the time when I should have turned teenage eyes to Han, instead.

And yes: I married Luke. I added a few years to my age and made myself 16 (even in my fantasy I knew that 13 was a little young). I fast-forwarded my Empire Strikes Back soundtrack tape to the part right at the end, when Luke’s getting his mechanical hand and the Falcon is preparing to zip off and find carbon-frozen Han. I’d listen in the dark, squeezing my eyes shut, imagining our very own little cave-house on Tatooine. Imagining how he’d look in moonlit darkness. Imagining…well, whatever I could, at that point.

Oh—and I was a Jedi too. And my black robes were very flattering.

Every time I watched the movies, in the years after they came out, I felt echoes of the me who’d longed for the whiny farm boy in the white tunic, the impatient apprentice in the orange flight suit, the somber man in Jedi black. I remembered my yearning for fantasy and escape so well that I still seemed to be feeling it.

Fantasy. Escape. Love. Youth. From 1977 to 1983, Star Wars and I were all about these things (which a Jedi craves not, perhaps. I never said I was devout).

Now, 32 years later, there’s a new film featuring the old faces. Old places too, though they might have different names (Tatooine has double vowels; Jakku has double consonants. Good enough). Old faces, old places, and the kind of fantasy and escape that will always feel young.

Manuscripts’ worth of reviews have already been written about Star Wars: The Force Awakens since it came out yesterday. Many of them have commented (whether favourably or scornfully) on the myriad ways in which it hews to the 1977 plot. Yes: secret plans in cute, blooping droids; baddies on a giant, killer space orb; lightsaber duels and face masks; parenting and mentoring gone badly wrong. All of this is back, but it all seems new.

One thing I haven’t yet read about, possibly because of the moratorium on spoilers, is Han and Leia. Everything moves fast, and the new, understandably, gets more screen time than the old, so we don’t see that much of them. What we do see, though, is remarkable. [Here begin my own fairly modest spoilers.] I imagine that, left to the man who created them, Han and Leia likely would have tied some sort of galactic knot a couple of days after that second Death Star blew and the Ewoks stopped drumming on Stormtrooper helmets. (Yub nub!) Thirty years later they’d still be together—happy, if careworn, bantering like the cocky smuggler and princess with hair buns I bet they’d always have been, to Lucas.

Maybe they were married, at some point: we don’t find out. They were a couple long enough to have a son and raise him to almost-adulthood; at one point Leia says something like, “I lost you when I lost him.” She’s still a princess; she’s also a general. He’s no longer a general; he’s back to being a smuggler. They are iterations of who they were 32 years ago—but they aren’t together. There’s regret between them. Sadness. A mature, weary connection that’s probably too complicated to be called love.

When Luke gazed at the Tatooine sunset, in Star Wars IV, the 7-year-old me imagined love. When Han and Leia gaze at each other, in Star Wars VII, I see what I’ve learned about it. Marriage, children, divorce. Regret, sadness, connection. Things that work, for a time, then don’t.

When I examine this critically, I acknowledge that, in ascribing depth and complexity to incredibly brief interactions, I may well be projecting almost as much today as I did back when. That’s OK, though. Star Wars first hit me at a time when my critical faculties were nascent at best (see first paragraph), and I feel no need to employ them now (likely something Abrams was banking on, and something he will, in fact, take to the bank). I’m going with it emotionally, as I always have—and the emotions are older. The connection is as real as the escape. 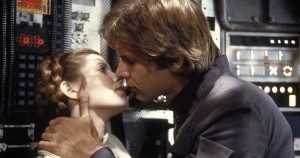 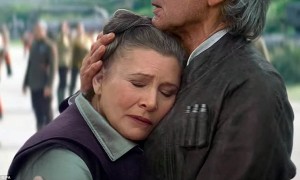