The Writing Process Blog Tour: I Take the Baton, and Pass it

Last week, Peter Watts tagged me in something called “The Writing Process Blog Tour”. I’m going to be lazy, and let him outline the terms: “It’s kind of an authorial chain letter. An author receives a series of questions (presumably of interest to the reading public); answers them on their blog; passes them on in turn to three other authors downstream.”

I’ve settled on two authors for tagging, rather than three, since I’m fairly sure this won’t impede or impoverish the exercise.

What Am I Working On?

I’m finishing up the sequel to The Door in the Mountain, which was published last month. The sequel is nameless, as of now—pretty typical, as I tend to take a couple of years to churn out hundreds of thousands of words, then agonize for what feels like almost as long over the very few words that will make up the title. My deadline for this one’s rapidly approaching, though, so I’m going to have to rely on relatively quick thinking—mine, or someone else’s: my publisher’s running a “Name this Book!” contest. So if you love Greek mythology, have a thing for Minotaurs, ancient Crete, and/or beautiful, bitchy princesses: e-mail your ideas to doorcontest@chizinepub.com.  Even if you haven’t read The Door in the Mountain. Seriously. Because sometimes out-of-the-ether insights kick the butt of authorial overthinking. (Of course, if you’d rather read The Door in the Mountain first, that would be great.)

How Does My Work Differ From Others In Its Genre?

This is a hard one. I’m always profoundly irritated when authors say things like, “My book’s going to turn fantasy on its head, because it’s SO dark/edgy/bracingly anti-epic/in every way unlike anything ever written in the history of the genre/etc.!” My irritation has to do with the smug, self-conscious, self-indulgent tone, and the certainty that difference means superiority.

So I’ll let some readers weigh in. I know: it’s unwise to turn to Goodreads reviews for trenchant, considered critique, and certainly for ego boosting or cheering up. But many of the readers who weigh in there have identified elements of my books as unique or different—and I figure it’s okay to quote them. Several of them: not just the ones who say these unique and different elements are fabulous.

To wit, re: my first book, A Telling of Stars:

“The plot is very nearly anti-fantasy. It’s beautifully written, it’s thoroughly imagined, and it messes with the reader’s expectations. So much will depend on your tolerance for being messed with.”

“The plot-minded part of my mind got bored because it felt like nothing was happening.”

Re: The Door in the Mountain:

“I really liked Caitlin Sweet’s writing style, because it brought to life Ancient Crete. The style of writing is not like that of a typical YA novel; Sweet’s writing really brings texture and vividness to the classical myth of the Minotaur. Detailed and clear, the world building in The Door in the Mountain was really enjoyable.”

“There is a strong focus on imagery that makes the story almost come alive as the reader can easily imagine being in the fictional world that she creates. Unfortunately, all of this lavish detail is ultimately a detriment to the actual story as there really is very little that happens in the story and the action almost seems like an afterthought.”

Why Do I Write What I Do?

In part, I write fantasy because I have a day job, a night job, kids. I’ve always written fantasy, because even before the jobs and kids there were schools of various sorts, and all the other obligations and associations of “the real world. ” “Ah—so it’s all about escapism,” some would say (or sneer) to this—and yes, that’s true. It’s simply more fun to imagine life in a desert palace in a place called Luhr than it is to render life in a government cubicle in a big North American city.

But it’s more than that.

I tried once, in a fit of “maybe all those genre detractors are onto something and I won’t be a decent writer until I produce something real”, to work on a contemporary story. It was set in an old house near the wonderfully funky Kensington Market in Toronto—but within twenty pages the house had turned into a mini-Gormenghast, and its lone inhabitant into a sort of sexy Radagast the Brown. (Am tempted to work “ghastly” in here somewhere, but won’t.) I remember that birds fluttered amongst the ivy that covered his living room walls, and alit on his head and shoulders… I just couldn’t stick to the “real” plan, and this was so stupidly crushing that poor sexy Radagast and his birds, and the heartbroken young woman who’d wandered into their Gormenghast, simply ceased to be.

Wonder, awe and magic have proven to be the only paths to fiction, for me. Not as a reader: I read all kinds of genres, from Jack Reacher (yes, I believe he’s his own genre, at this point) to Borges to Austen to Stephen King. As a writer, though, it’s always been fantasy, always impossible places and people that allow me to get to those things that are real: struggle, transformation, the torment and beauty of creatures trying to fumble their way through the same world.

How Does My Writing Process Work?

1.  Finish writing a book.
2.  Spend months scrabbling through old “ideas” notes, because I have not one single new idea for another book—but the old ones never lead to anything except MY GOD I’VE WRITTEN MY LAST THING EVER…
3.  Have an idea.
4.  Make a few vague notes about where the story might go; make many detailed notes about the beginning.
5.  Write the beginning—on the streetcar to work, or at a café on my lunch break, or at a pub on Thursday nights.
6.  After between 50 and 100 pages, collide with the large, dark, vague mass of the rest of the story. Whinge to husband about how this story will probably die the way those other two did, at 45,000 words, after months and months of work.
7.  Think while walking from subway to work. Think while showering (and providing husband with keen insights into his own plots).
8.  Resume writing. Plow through the quagmire of the middle section. Feel cautiously triumphant about middle section.
9.  Hit 80,000 words, or thereabout. Start thinking, “It would be good to know how this ends, soon.”
10. Hit 90,000 words. Still no ending—but no panic, either, because what I’ve written is strong enough to support several endings, right? I simply have to figure out which one will work best.
11. One day or night, watching TV or a movie, or sitting on the porch with cats, kids, husband, wine, or reading someone else’s words: there it is. My ending.
12. Finish writing the book, 1.5-3 years after #3, above.
13. Return to top and repeat.

And now for the blog baton-passing. I’ll huff and puff up alongside A.M. Dellamonica and Kelly Robson, whom I met last year when they decamped from beautiful Vancouver to Toronto (for no reason my pining former Vancouverite husband could comprehend). Like Peter and I, they’re married. Like us, they both write: Alyx full time (like Peter), and Kelly whenever she can, depending on her day job (like me).

I want to hear how they do it. 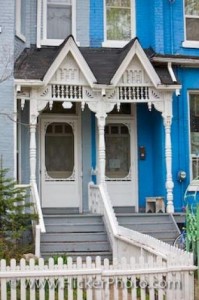 The Kensington Market Gormenghast that never was.