The fifth paragraph, which begins “And that’s the point”, is replete with spoilers. Other than that, though, it’s just general diatribe.

I wasn’t expecting to love Prometheus. I’m not a rabid fan of the original movies, and I haven’t been waiting for this one with bated breath. I figured it would be entertaining—that I might be surprised by an image or plot twist at some point along the way.

The surprise has turned out to be how vehemently I disliked it. It kept me up last night, this dislike. It has made me cranky and possibly a little incoherent.

Watching the first two movies of the Alien franchise, I knew that there was a dark, twisted, utterly strange world beyond the edges of the screen. Something else’s history slept and stirred as the Nostromo’s crew stumbled around, understanding it as little as I did. The dread came from the glimpses, from the not knowing, from the not even wanting to know.

And that’s the point: I didn’t want to know. And Ridley Scott (who didn’t know what any of it meant himself, way back when) went and tore away the curtain and revealed—what? Ginormous-headed alabaster dudes with Ebola (maybe) who created humankind (maybe) and then (maybe) wanted to destroy it. A very pretty 3D star map. An alien ship whose controls lit up (as Peter put it) like a Fisher Price toy. The founder of the sinister, faceless Weyland-Yutani Corporation—Guy Pearce, as it turned out, wedged into wrinkled latex, maundering on about death. Some small slimy worms and a much, much bigger thing with a bunch of mouths and tentacles, which impregnated one of the alabaster dudes with something that, at last, was a Ridley Scott alien I recognized. But by then it was way, way too late.

Roger Ebert wrote, in his review: “Prometheus is a magnificent science-fiction film, all the more intriguing because it raises questions about the origin of human life and doesn’t have the answers.”

Well, no. Musings about the nature of divinity and humanity, history and destiny, are just plain embarrassing when you word them clumsily and put them in the mouths of cardboard characters. For this movie to have succeeded as a prequel-in-spirit, it should have dispensed with the existential questions (Why is humankind here? Is there a god?) and given us elemental ones (Why am I here in this gooey air duct and oh my god what was that noise?).

Back to the dread thing: I felt not one frisson of this. A tired sort of inevitability, yes: that slimy worm is definitely going in the stupid biologist’s suit, and there’s probably going to be a flamethrower, and gee, I wonder when a wet, pale little alien’s going to bust out of someone’s gut. I wanted dread! The creeping, edges-of-your-vision, pit-of-your-stomach kind that ran through Alien/s like milky android blood. Simple, primal, delectable dread.

I’m pretty sure that much of the ambiance of early sci-fi and horror movies was shaped by budget constraints. Keep things dark; have the monsters move very, very fast and don’t show them too often; pay attention to a couple of rooms, because they’re all the set you’ll have. 30 years later, though, it’s all about the enervating detail and exhausting bombast of big-budget CGI. I’m so tired of it. I liked Tom Baker’s one-room, Swiss-cheese-holed TARDIS better than David Tennant’s gigantic, super-fancy one. Frank Oz’s rubber Yoda had more life in him than virtual Yoda, no matter how much kung fu-fighting the latter might have done in that prequel whose name I’ve tried to forget. And I don’t care if it was laughably archaic (especially for the 22nd century): I liked the Nostromo’s clunky control panel and its damp, hissing, cramped, cable-strewn corridors.

A setting that’s intimate and believable enough to become a character: that’s what Alien/s had and Prometheus doesn’t. That, and human characters you feel you come to know, at least a little, before they die.

Silence, too. Somehow silence has become another casualty of CGI—as if directors feel they have to lay on a musical score that’s as relentless and grandiose as the images. There’s no space for dread when there’s never any quiet.

John Carpenter’s The Thing, the original Alien/s: these are stories about people trapped in bleak nowhere places, fearful of both monsters and each other. People waiting, often in silence, moving from despair to defiance and back again. These are good goddamn stories.

Oh, Ripley. Oh, Jonesy. We will not see your like again. 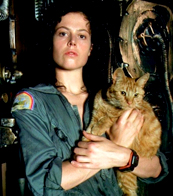