I know no one at NPR. I don’t think I know anyone at the National Post, yet one of their columnists called me, also yesterday; someone at the paper had told her that I was great, and exactly the right person to ask about Ray Bradbury’s life and legacy. Sadly, this person I do not know was wrong about the latter (though obviously incredibly well-informed about the former).*

The CBC Bookie. The Aurora. The National Post. This NPR thing. Wow.

This is the same variety of “wow” that I utter (sometimes silently, others aloud) when I’m about to do a reading and I see that there are people I don’t know in the audience. “Do they think someone else is going to be reading too?” “Was the program wrong? Are they actually looking for the panel on Game of Thrones?” (Okay, so there are never that many people at my readings.)

Yes, more than a whiff of imposter syndrome. More than a dash of surprise and delight. And yet, at the very same time as one part of Caitlin gasps and wonders at these turns of events, another thinks, “Well, of course. You wrote a good book. It deserves this – and then some.”

These two Caitlin-facets co-exist fairly peaceably, for which I’m grateful. Kind of confused, but grateful.

Petra Mayer at NPR: I’m grateful for you. And Melissa Leong at the National Post. And whoever it was at CBC who nominated The Pattern Scars for the Bookie. And all of you who’ve headed for a stuffy hotel “suite”, knowing exactly whom you were going to see.

Also Tyrion Lannister/Peter Dinklage. I’m grateful for you too. 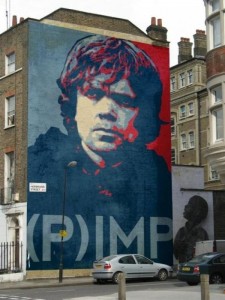 * The columnist ended up going with a quote (lead-off, no less!) from my esteemed, Tall- Science-Fiction-Writing Husband. Which pretty much confirms that the universe is unfolding as it should.