I spent my four BA years reading, thinking about reading, writing about reading. I read Milton and Hesse, Lorca and Kincaid, Senghor and de Beauvoir, Borges and Whichever “Anonymous/es” Wrote Beowulf. I hunkered down in sentences and examined individual words; I built entire essays around an image. I didn’t always enjoy this; in fact, near the end of my fourth year I wondered if I’d remember how to read for pleasure, once I was out of university. But what I remember now (through a haze of nostalgia and distance, granted) is how it felt to wander around the McGill campus with my head full of words: other people’s and my own. I remember that the inside of my head felt prickly, juddery, always a little off-kilter. There was a restlessness about this reading and thinking that I’ve never come close to, since.

Until yesterday, in a lecture hall in the Ramsay Wright Laboratories (aka Department of Cell and Systems Biology) at the University of Toronto, where I sat with the students of an undergraduate English class as they discussed The Pattern Scars.

The first thing I saw, other than the students themselves (and I was almost too afraid to look too closely at them), was a screen with lecture notes projected onto it—via laptop, not the overheads of my own undergrad days, whose images inevitably warped at the edges. The Pattern Scars‘ cover was up there, and quotes about fantasy, and my book’s subversion thereof. As the lecture progressed there were quotes taken directly from the book itself, and discussion points about Nola: the varieties of her victimhood and imprisonment; the paradox of her desire for the power, and the man, she hated; the writing of her own story; her ending, which could be seen as her first and final act of autonomy.

One student said that he’d hated this ending, as a reader who had narrative and emotional expectations, but also that he’d completely understood it—that it had been right.

Another student remarked on the syntax of Nola’s “Teldaru cursed me” statement, in which she continued to make herself an object, even at the moment of her freeing.

I haven’t been in Nola’s world for years. Seeing her words up there, larger than life, made me teary. Watching students flip through their copies of the book made me teary. It’s a good thing no one was paying attention to me, because I was so relentlessly teary.

I’d recovered by the time I did my reading: a passage from the as-yet-unnamed Door in the Mountain sequel. After that I answered questions from instructor and students—a lovely cascade of questions, after an initial, silent, collective hesitation. I’d had three hours of sleep the night before, and I’d so recently been, yes, teary; I was sure, right up until I started speaking, that I’d stumble over both the reading and my answers. I don’t think I did. I felt wonderful.

Students lined up to get their books signed, after the Q&A time ran out. I signed a few, then glanced up and saw how long the line was, and felt a little shaky again.

So I got to go back, for a few hours, to a room where people talked about words, and what they might mean. To have those words be “Nola”, “Bardrem”, “Otherseeing”, “Sweet, The Pattern Scars, 2011”—well, as I might have written in my journal, in 1990, after a particularly overwhelming class: It was too much. Too painfully, wonderfully much. 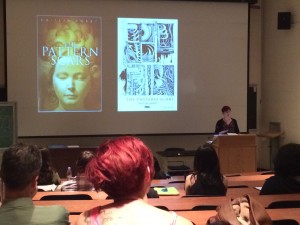 The woman in the foreground (Rhiannon, I believe) shares my hair colour. My cover is huge. I am small.