Funny, how intense is the nostalgia generated by Decembers and epic franchise movies. Lord of the Rings, for example: Whenever I watch the first installment of the trilogy now, and catch that opening glimpse of Frodo in Peter Jackson’s Shire, I remember my sister grabbing at my hand in the theatre as both of us teared up with relief and recognition. Later, as Aragorn led the Fellowship out of the Mines of Moria, without Gandalf, I remember grabbing my sister’s hand and pressing it against my belly, within which my second child was performing a complicated underwater percussion solo with her feet. I tell said daughter (now 14) this, every time we watch the movie as a family. It is, for both of us, eye-rollingly predictable (“Here it is! This part right here! You went nuts right here!”), but tough: it has become part of the experience of this movie. Memory forever layered with image.

Sometimes the nostalgia is even more complicated: a movie remembering another movie that I remember; a tangle of personal and meta. So it was with The Force Awakens, last December, and so it was this December, with Rogue One. (Mildest of spoilers ahead…) Somewhat unexpectedly, I found that Rogue One did nostalgia better than its holiday predecessor. A mere day later, trying to figure out how it pulled this off, I’ve come up with the following: because the Big Three cast members weren’t—with one brief, CGI’d exception—involved, many of its call-outs to canon are fairly subtle, in some cases almost peripheral (that little Imperial box droid zipping along in the background; a brief appearance by that snub-nosed dude and his creature buddy, who would, only a short time later, though in a different movie, take exception to Luke in the Mos Eisley cantina; blue milk!). This makes for a story that relies more on its own merits than it does on immediate, unquestioning love for familiar faces. (I must admit, though, that that first shot of the back of Grand Moff Tarkin’s head made me giddier than I could ever have expected. I didn’t even need the CGI’d face. The hair was enough.) No lightsaber until the very end. Minimal use of Force—though there was early use of the Force theme. And that’s really why I think I liked this movie better than last year’s. The music.

Which is weird. I love the original trilogy John Williams soundtracks with the intensity of those two unlikely Tatooine suns, and Williams also did the score for The Force Awakens—so why did this music, by Michael Giacchino, hit me harder?

Something about familiarity accompanied by change. A woman dipping back into a place adored by a girl. Memory satisfying transposed.*

You know from its second frame that Rogue One is going to be the same old Star Wars experience, but different. “A long time ago”: the words are there, and the notes of the familiar fanfare are already sounding in your head—except they don’t sound. There’s no fanfare, no crawl. The (literal) tone is set.

Giacchino’s soundtrack evokes Williams from the outset, in sweep and orchestration, just as Williams’ soundtracks evoked Mahler and Holst. Listen: the skirl of oboe from Return of the Jedi! The familiar fanfare for two notes, at which point it’s inverted. Piccolo and harp. Syncopations and muted trumpets. The timpani rolls. Snippets of the Imperial March. The same dreamy violin line that accompanied the final scene in The Empire Strikes Back—but only for a moment. There are so many such moments: fleeting, delighted recognition, followed by newness. It should have felt like a giant tease, but it didn’t.

I would have been well content with Giacchino’s music alone. That’s saying something (see my comment re: Tatooine’s suns, above). This new music was enough.

But then the end. The cargo ship from that galaxy far, far away, in 1977. The gleaming white corridors; the desperate Rebels; Vader advancing. The princess draped in white (“Computer-generated face,” my brain told me as I teared up, “and super-weird, but I don’t care”)—and, at last, at last, the other music. The first. Echoes of Mahler and Holst and Williams and now, like a melody inverted and transposed, Giacchino. 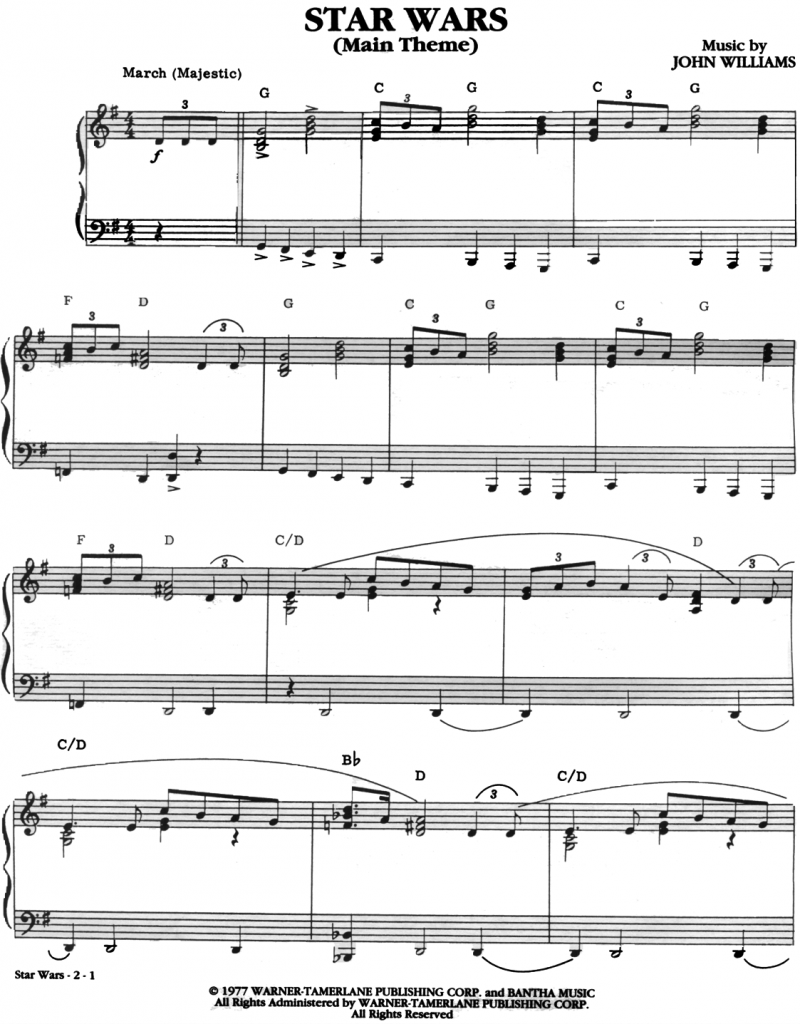 *All of which puts me in mind of South Park’s savagely brilliant take on nostalgia, during its mostly excellent, if horrifying, 2016 election season: the “’member berries.” “We all want something new, but that makes us remember the things we love. We want to ‘member. ‘Member Chewbacca?”