I Remember the Ansibles

Last Tuesday night, while I was at Mt. Sinai hospital, Peter texted me that Ursula K. Le Guin had died.

I was at the hospital with my friend Megan, who was in labour with a boy she’d already named Monty. Her mother was there too, exhausted from a trip down from Sudbury and a sore back and a night of only a few hours’ sleep, thanks to Megan’s, “I think my water broke…” at 2:15 a.m. Megan was still fairly comfortable, when I got Peter’s text. I clutched my phone and felt a wave of something profoundly weird: sort-of nausea; sort-of adrenalin rush. Moments later, there it was on the CP24 newscrawl on the TV at the foot of Megan’s bed: Ursula K. Le Guin, award-winning science fiction author, has died at 88.

In 2002, when my first novel was, at long last, finished and ready to go to press, I wrote to Ursula. Penguin Canada had asked me to get in touch with authors I admired to ask them to blurb the book. I spent days on my letter to her. I pared back the adulation in the opening paragraph in what I thought was a very impressive show of restraint and professionalism. I allowed the mention of ansibles to stay. I thought the result was pretty fabulous.

I can’t be sure now, though, because I can’t find the letter. That was five computers ago, in a different house, in a different marriage; there’s no hard copy in any folder, or not that I’ve found, anyway.

She sent me a reply a month or so later via a handmade postcard that I immediately displayed in the most visible place I could think of: the fridge. Thick card stock, rough-edged. She’d done an ink drawing on one side, of a cat curled up asleep. On the back, more ink: my name, written by her. Other words: Thank you…will try to get to it…looks wonderful…

I can’t be sure now, though, because I can’t find the postcard. Three fridges ago. That different marriage. All the boxes I packed, while leaving that other house; all those boxes unpacked, but I’ve never found it.

And then it was 2005, and Penguin Canada sent me out to Vancouver to promote my second book. I was staying at the Fairmont Hotel Vancouver, wide-eyed, alone, vertiginously free of toddlers and tasks. (I almost cried when a hotel employee asked me how I’d like my coffee, in the morning, when it was brought to my room.) The hotel was full of people: a conference, I soon realized, whose theme was English literature and education. I wandered about, tippy with the vertigo, and there she was, standing in the middle of the main corridor. She was tinier than I’d imagined (shouldn’t our idols always be at least as tall as we are?). Her face was far more lined than it was in her author photo, but I recognized her immediately anyway. She was standing with an elderly man, holding his arm. I remember that they were both wearing khaki raincoats.

I wobbled over to them. I think I said, “Ms. Le Guin?”. She turned and looked up at me and smiled. And I babbled. I said something like, “I wrote to you two years ago because I had a book coming out and you wrote back—you wrote me a postcard with a cat on it—and after that you wrote a letter that said you wouldn’t have time to read the book, but that’s OK, and I’m here because I’ve written another book, and I love you.”

I’d like to remember that her smile didn’t waver, but I’m pretty sure it did. She said, “Ah!”, brightly. And then, “We’re going for a walk; trying to get it in before the rain.” And I, flushing and nauseous, stammered, “Yes…Vancouver…rain…” And off they went, slowly, toward the door. Her hand still on his arm.

I went back to my room. I tore a piece of paper from my notebook and I wrote to her with one of the hotel pens. I apologized for my babbling. I expressed my admiration in measured, precise terms.

I can’t be sure now, though, because I have no copy of this missive. I folded it up and dropped it with the front desk, with her name on it. I nurtured a hope, for some hours thereafter, that I’d hear from her. The hope made me feel stupid, even in its earliest incarnation. By the next day, I flushed all over again, thinking about it.

I can’t be sure about her books now, either. I have an increasingly terrible memory for books and movies, hers included. And yet I do remember how I felt when I read them. I remember that her words were, with Lloyd Alexander’s, the only ones that ever made me want to cry because they were so beautiful.

And I remember being 21, and thinking I was pregnant, and finding an essay of hers in an anthology called (I think) The Choices We Made, about abortion. She’d chosen to have one. I was thinking I’d have to, too. And these very real words of hers made me want to cry even more than her others had, because I was freaking out, and there she was to steady me.

I discovered the rest of her non-fiction around the same time. I scribbled quotes in my “quote book”, until it was ridiculous: I was essentially transcribing entire essays, because all of them shook me, made me think, “Exactly!”, made me feel vulnerable and indestructible, as a writer and a woman.

After baby Monty was born, in the darkest, deepest part of the night, I walked with him. His mother and grandmother were sleeping, in bed and reclining vinyl chair. I held him and I walked back and forth across the room, because whenever I tried to ease him down into the bassinet, he mewled, and his closed eyes fluttered, and his hard little heels thrust at me from within his flannel swaddling. So I walked, jiggling him and patting his back, swaying and patting his back. I held him, this solid, warm, new mammal, and I thought about Ursula K. Le Guin, and how she’d done this too. How she’d jiggled newborns and also hugged cats and written words. How she’d drawn pictures on postcards to send to people who loved her—to young writers who’d get older and lose the postcards and forget the words, but not the love. 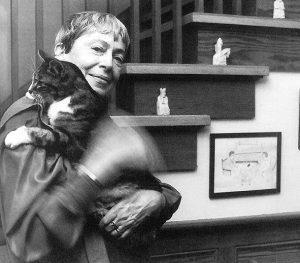