Bench Cats of Bergen, and Other Stories

Took a photo over Germany of this making of it. Here it is, to prove that I wasn’t tearing at my hair or lying prone in the aisle or buttoning and unbuttoning Peter’s jean jacket for seven hours. No. I was sitting by the window, quite serenely.

Toronto to Frankfurt; Frankfurt to Bergen – a city come sadly late to incorporation, as per Wikipedia: “Trading in Bergen may have started as early as the 1020s, but the city was not incorporated until 1070.”

And what a city it is: terraces of trees, bare rock, red-and-brown-tiled, sloping roofs. 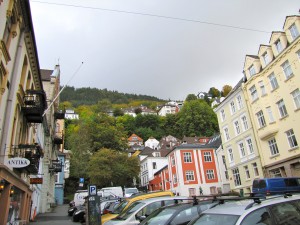 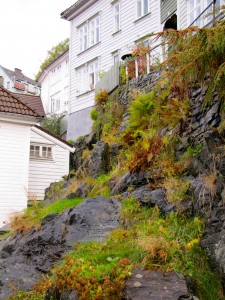 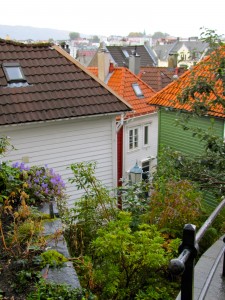 We walked and walked. On our very first night there, jet-lagged and full of cider, we meandered through the wooden alleys and galleries of Hanseatic Bergen, where rich, celibate merchants had lived off fish and by the Bible and poor working boys had toiled and slept, without light or heat. (The whole area burned to the ground and was rebuilt in 1702. So I guess it’s understandable that the merchants were averse to open flames. No comment on the celibacy thing, though.) 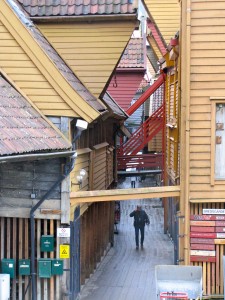 In grey daylight and thronged with people, the place lost mystery but gained colour. 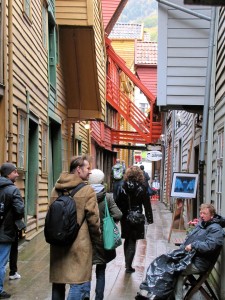 “Rain-soaked” was the name of the game, here. The sun came out once. Like so. 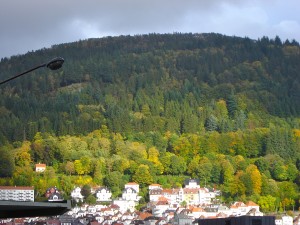 The lack of sunlit blue was a good thing (though the American women behind us on the train to Oslo would vehemently disagree with me). You’ve seen one cloudless, bright sky, you’ve sort of seen them all. But in Bergen, as in St. John’s, what’s above you truly is “skies,” plural. You’re standing atop a lookout point by the 13th-century castle, gazing out over the bay, and the clouds and water are a light grey; you turn to look behind at the city and see that the far mountains are black with advancing rain; four minutes later the rain’s pounding down on you and you’re running for cover while magpies stare beadily and almost certainly scornfully from the lawn.

Also good: the varieties of mist, fog, rain and cloud bring out the colours of the city.

Karin, our university professor host, had us put up in an apartment full of Ikea, featuring a fridge full of food (including a gigantic fresh cod fillet, which we cooked, haplessly and to therefore improbably delicious effect, on our first night there).

After one night of semi-jetlagged sleep, we gave talks to Karin’s masters biology class and a healthy number of non-biologist general public types. According to Karin and our audience, the talks were good. 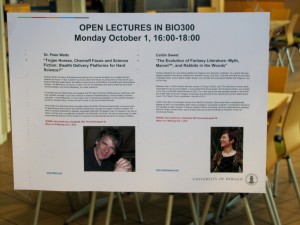 The next morning, Peter was briefly, inexplicably sick. I was not.

A mere two-and-a-half days after arriving, we hauled our luggage through the teeming rain to the railway station and left. Bergen to Oslo…

But that’s another story. 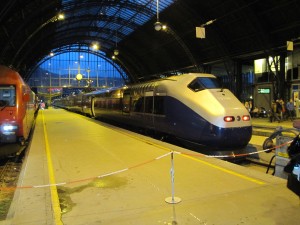