Years ago, just after my second book came out, I attended a swishy Penguin event to welcome the man of that particular hour, David Davidar, to the company. (Not all that many years later, this is what became of him.) Afterward, because sometimes canapés just aren’t enough, my editor invited all “her” authors out for dinner. I ended up beside a young woman I’d never met before, who, before the appetizers arrived, had already made it clear where she stood on a number of issues. One of them was TV.

“I don’t even have one,” she said, in a tone that managed to be snippy as well as languid. “There’s simply not enough time to write—so why would I possibly waste my time on TV?”

I said something like, “I really enjoy TV”, in a voice that trailed pretty quickly into silence. Her self-satisfaction was intolerable, but it was also daunting; I didn’t have it in me to challenge her.

Now, ten years later, I will. Because (and this is both rationalization and truth): TV helps me with writing. And in a related “because”: Justified.

I’ve always said that I’m not really any good at plot, possibly because I pay too much attention to certain reader reviews. (“It’s a story that’s definitely more about people and character than about a fast action plot”; “The plot-minded part of my mind — ha — got bored because it felt like nothing was happening”; “Didn’t read until the end, wasn’t going anywhere”—I could, but won’t, go on.) The Silences of Home was tough, plotting-wise: so many threads and creatures and battles, which I’m still convinced I’m not good at, either. The Pattern Scars: different reasons, but same problematic plotting. Walking briskly down to the beach sometimes didn’t help. Sitting in coffee shops with a fresh notebook page in front of me often didn’t help. What did help, in both cases, was Law & Order: SVU. Yes. Because every night (thank you, syndication) I got to see how formula can work, and work well. And how characterization can be done deftly, or not, and what effect that has on plot. Part of my brain would be actively following the stories; another part would be quietly making associations and decisions about my own story. I wouldn’t be able to give any specific examples of these decisions, if someone asked me to, and I know this sounds like an authorial brand of truthiness, but: Trust me. I know it happened because I felt it happening.

And it’s not just about plot, whose requirements can be fulfilled even via not-so-great TV. Watching a good story provokes the kind of raw, emotional response that makes you want to tell a good story. Take Justified. My god, the heady joy of it: the language (especially the Boyd-Raylan banter), the crossing and double-crossing, the mayhem and murder, the inter-family vendettas that run so deep they’re practically chromosomal—but really, especially, the language. Your jaw drops, listening to it. It surprises.

I think that’s what this blog entry has been trying to say, o long-ago Penguin dinner companion of mine. Like any art, TV, at its best, is unexpected. It’s new. It hits you in the gut and the synapses and shakes you out of solipsistic creative doldrums. It can also make you want to drink bourbon. A lot of it. 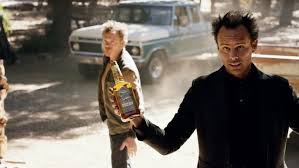