I haven’t had any trouble with each of my three books’ dedications. With the wording, perhaps, but never with the names, which slipped onto those first blank pages as if I’d been turning them over in my head for as long as I’d been writing the books. (Yes, OK, so maybe I had.) But an Acknowledgements section? Nope. Never. What if I forgot someone? What if, in the process of not forgetting anyone, I ended up with an Acknowledgements section as long as a really, really tedious Academy Awards acceptance speech? That, or a Yearbook entry unintelligible to anyone but the person being written to: Ohio ’88—mustard and inflatable eggs! Never forget! So normally I’m loath to say my thank you’s in a public forum. But my book launch, on Saturday, November 5, was different.

Great, thought I, in the days leading up to the event; I know exactly whom to thank. No need to write anything down. And if I get overwhelmed and goofy [and, as it turned out, virus-ridden], I can simply scan the attendees for faces that’ll make me think: Oh yes! How could I have forgotten you?

This worked, right up until the end of my gloriously notes-free speech. It worked until the point when I should have thanked someone whose contribution to this book was profound and immeasurable—and didn’t.

So here’s what I said—or should have.

The first line of the Bakka-Phoenix invitation to this launch was: CAITLIN SWEET IS BACK! And it’s true: I’ve been away for a long time; nearly seven years. Today, though I normally avoid acknowledgements, I do have thank-you’s to say—because there are so many people who supported me, even unintentionally, during the writing of this book.

Dave Nickle. Who said to me, one day over sushi, “You know, you really should show this manuscript to ChiZine. Want me to send them an email about it?”

ChiZine Publications—which is to say: Sandra Kasturi, for being the second wonderful editor I’ve ever had (and for teaching me that “Welsh rabbit” doesn’t actually contain bunny). Brett Savory, for driving my advance copies to me and always being so tireless and reassuring—and for forgiving me when I called him “Brent.” (And really: Savory & Sweet—how cool are we?) Sam Beiko, for impressing me with her proofreading skills and then blowing me away with her endpaper-designing ones. Erik Mohr, for the cover that still takes my breath away. Ryan McFadden, for the Baby Duck (though he gave me this years before he turned my manuscript into an ebook).

My sister Sarah. Yes, the book is dedicated to her—and yet in the dedication I merely allude to her effect on my work. I’ve depended on her incisive and impassioned critiques ever since she was about ten, sitting cross-legged on my single bed, telling me what did and didn’t work in Rowansong (my once-and-probably-forever unpublished YA fantasy). The Pattern Scars was withering on the vine when I gave it to her to read, and she resuscitated it—paradoxically enough, by telling me to get rid of Book II (25,000 words of it). I continue to need her quite desperately.

Peter (Tall Science Fiction Writing Husband). When I met him, I’d already been working on the book for a little over a year. When I finished the first draft, one late July night/morning at 2:30 a.m., he was still awake, across the city, and he got all teary because he understood my own wobbly joy so well. And then there was that evening, six months later, when my agent dumped me over the book. It also happened to be Peter’s birthday. There was no celebratory dinner: just me in the foetal position, and him still, always understanding.

Each and every U of T student I’ve had since fall 2007. I started the book then, and shortly thereafter began regaling my classes with examples that I hoped would illustrate both craft- and business-related elements of writing—by which I mean: I really needed to vent, and they were incredibly generous ventees. I continue to hope that the venting sounded like insight. Special mention goes to Leigh-Ann, who somehow managed to be student and mentor at the same time. (The Merlot was helpful, too.)

Chris Szego. Though she is, of course, a stellar bookstore manager, she’s also been much more, to me. She brought me packing material when I was moving. She came to my place armed with books and helpful advice when I was newly agentless and floundering, wondering what to write next and whether this even mattered. She’s the steadiest, most steadying kind of friend.

Martin Springett. I thought I was lucky, when he did the cover for my first book. A once-in-a-lifetime experience, I thought—and yet, nine years later, there he was again, putting images to my words. And what images they are: bones, trees, eyes, a girl’s face, a woman’s—all dark, stark, and beautiful. The Pattern Scars is so much richer for them.

So thank you, Spong, for these images. For Nola and Borl and Uja, sketched on pieces of tracing paper and taped together; now hanging, gloriously framed, on my dining room wall. And thank you for your friendship of these many, many years. I am so much richer for it.

Now for some photos—all of them taken by Martin’s amazing daughter Rebecca. 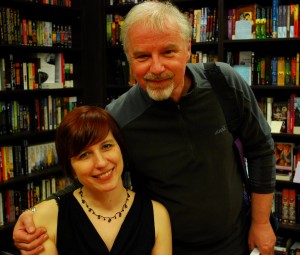 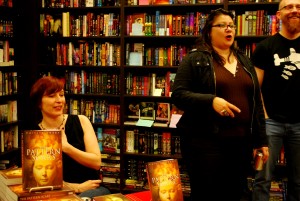 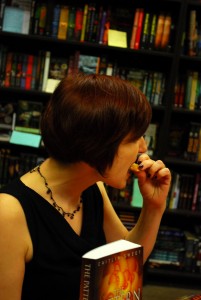